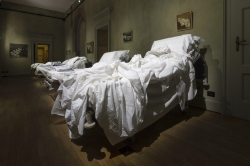 I had heard of the name of Massimo Vitali and understood he was an Italian photographer of beaches. And I had heard that he had been born in Como and had once said that “Life is a Beach”. Enigmatic enough.

I had never heard of the name Vitali as being that of an elderly recluse painter living near Lake Como whose first name was Giancarlo. Giancarlo Vitali’ s painter son Velasco wrote me a letter saying that his father was to be celebrated in Milan after years of silence, and would I be curious to take a look. What had caught Velasco Vitali’s attention was a remark I had made in the introduction to a projection of a recent film I had made about Rembrandt. I had said something like it was a great melancholy that painters did not seem to talk to filmmakers and that filmmakers did not appear to speak to painters, that there was missing dialogue somewhere. Painters and filmmakers should, in every sense of the word, talk to one another, have a dialogue, many dialogues, exchange languages. Their business after all was looking and seeing and both could reap benefit.

I am biased. I was trained as a painter and it was always what I wanted to be from the age of thirteen and had no idea at all how I could bring that ambition to any sort of fruition. I was once asked by an Italian journalist how was it that – starting my career as a painter I now made films? I gave the answer that I was unhappy that painting did not – as a rule – have soundtracks. There are paintings by Rauschenberg that had built in transistor-radios – though for the most part the radios were either broken or switched off so one could never be convinced. And John Cage has several illuminating comments to make about potential paintings with soundtracks. Perhaps that is what I still aspire to – paintings with soundtracks – and for me the paintings do not necessarily have to move. And they certainly do not have to tell stories.

Factors of interest in a project are usually multivarious. I was intrigued about recluse painters and had secretly envied the idea. I was once told I was conceived on Lake Como; I was never certain that the comment was a metaphor or a reality. I like the Ghandi quotation: “First you are ignored, then you are laughed at, then you are attacked, and then you win”. Giancarlo Vitali curiously had won. Maybe it could be said he had not wished to win. He after all had been a recluse deliberately and now he was to have a celebratory exhibition in Milan. All these things – recluse painters,

Lake Como, the Ghandi quotation – and maybe more – much more – like the excitements of museumology, like the homage a painter-son would like to direct to- wards his painter-father, like general ideas of the celebration of art, like the saying accredited to Picasso: “The worst thing you can do with a painting is hang it on a wall where within a day it gets forgotten”. All enigmatic enough.

I went to see Giancarlo Vitali’s paintings stored in his son’ s studio in Milan. V elasco Vitali made comments and remarks and considerations about his father’s paintings. When he affectionately talked about his father, he was smiling. He said that the paintings were unfashionably figurative. They appeared to be uninterested in contemporary painting styles, tropes, obses- sions, fascinations, dogmas, sensibilities. I was struck by the fact that Giancarlo appeared not to be interested in being celebrated and took little interest in an exhibition of his work in Milan. Could this really be true? I learnt that Giancarlo Vitali had essentially given up paint- ing, that he did not want to paint anymore, that he was in his mid-eighties and still living on the banks of Lake Como. I have always been intrigued about artists who apparently, it was said, had given up on the very things that had deeply satisfied them all their lives and had lived on without practising them any more for many years after their curious decision to desist – Velàzquez, Shakespeare, Duchamp could be said to fit this category.

The Giancarlo paintings intrigued me. For me they were sombre, melancholy, claustropho- bic, sorrowful, sad. They were also painted with a quick and lively manner, handling paint with bravura and confidence. I enjoyed the brushstokes, the painterliness, the drip and splutter, scratch and smear of the paint. The stickiness. They reminded me strongly of the figurative painters of my art-school education in the very late 1950s – the Slade painters, Bomberg, Auerbach and Kossoff, who them- selves had been taught in the age of the Eng- lish impressionists by the likes of Sickert and Tonks and Augustus John, painters whose rep- utations had seldom travelled outside England. Their natural successor would be a painter like Lucian Freud. The Giancarlo paintings were also humble. They painted humble content – artisanal subject matter – material to be used – not just looked at – fish in a pan, table nap- kins, fungi to be cooked, broken fruit not to be wasted, scrawny naked chickens to be prized for the evening soup, inexpensive clothes to be rewashed and rewashed. And there were those self-effacing grandmothers who sat quietly in the corner of the kitchen. When the paintings quoted other painters they quoted the humble painters, Rembrandt, De la Tour, Soutine. They were also affectionately critical, quietly ironic, gently satirical. They embraced caricature but without venom. I considered the back and forth information I was being given and I could see for myself. I was intrigued.

I have never thought that painting historical- ly was painted to be hung aseptically on white walls in rooms where no body lived, in other words the way that paintings are habitually hung in galleries today, in artificial deliberately unchanging light along with little pieces of text that supposedly identify them. Do you at home – if you own and prize paintings – do this? Are not your paintings hung above the laundry, squashed along a wall with yesterday’s newspapers, partly hidden by an undrawn curtain, caught in patches of sunlight that keeps changing, accompanied by noise from the street and chatter in the room, and quickened by the scents and smells from the kitchen? Is your home an art gallery where you insult paintings by pretending they are either not there at all or are there to shout at you? English travellers in the seventeenth century returned to England after visiting Holland surprised that the Dutch hung so many paintings on all their walls, alongside the mirrors and the maps and the tulip vas- es, in the shadow of the servants carrying fresh linen and close by the unwashed dinner-plates on the breakfast table? It seemed to me that locations of perceived high culture were not so sympathetic to the paintings of Giancarlo Vitali.

We searched for places in Milan to hold a Giancarlo Vitali exhibition. I felt unexcited and had little enthusiasm to be involved until we walked into the Casa del Manzoni. A house of scuffed door lintels and poor light, dim wallpaper, of worn floorboards and scratched mirrors and a quiet gentility. The house had been gentrified into a solemn museum. But we could do something here – we could ungentrify it. We could domestic it. We could make it a temporary sympathetic home for Giancarlo Vitali’ s painting. We could consider making it a place where the ambience might say something to the contents of the painting. Where the paintings did not shout at you. Where the paintings respected the author’s reticence, his desire to be humble and reclusive.

I am much excited by the genius loci of a place. In the making of films, the architectural ambience is instrumental in supporting the drama you place within it. And that architectural am- bience is constructed of incidentals that are the

result of time and smell and atmospheric taste and the accidents of usage and the way its inhabitants have organised it to their convenience. A building and a lived-in space has accrued detail and material that was scarcely envisaged by its architects and builders, even in fact detail and material that the architects and builders might have found detrimental and antagonistic. The ingenuity of cinema art direction can be very sophisticated and can sometimes hope to reproduce that accrued genius loci, but the real thing always surprises and delights with its incidental identity, often eccentric individuality and previously unanticipated peculiarity. I was curious to imagine that, inspired by the Giancarlo Vitali paintings and led by what I perceived to be their atmosphere and ambience, that particular iden- tity could be suggested. Accordingly we have introduced materials into the given spaces. The paintings of what might be called natural history, domestic comfort and familiarity, and the ambience of a modest hospital have been introduced to season and compliment the particular sensibilities of the paintings of Giancarlo Vitali.

Paintings are not of another world, they are of this world. And we should be very happy with that. It is all evidence to help us look and see. And live.